“Dutch horticulture wants to share its knowledge with China to help ensure safe and clean food production.” Martin van Gogh, director of Batenburg Techniek / Hoogendoorn and ambassador of the Dutch horticulture, did this offer to the Chinese premier Li Keqiang. Van Gogh met the premier during the CEO Event ‘High-Tech Innovation and Sustainable Connectivity’ in The Hague.

Premier Li Keqiang was received during the CEO Event in The Hague by presidents of ten Dutch multinationals, such as ASML, Shell, KLM and Philips. Other guests were Prime Minister Mark Rutte and Minister for Foreign Trade and Development Cooperation Sigrid Kaag. Chairman of the meeting was director Hans de Boer of VNO-NCW.

Providing the rapidly growing population with reliable food is a big challenge for the Chinese government. Van Gogh indicated that Dutch horticulture can help with the production of safe and clean vegetables. Hoogendoorn also has experience in this: it has been active in Asia for many years. “Our vision is to create sustainable food production in China and the rest of the world: energy-neutral, with less use of water and less air pollution.”

As an ambassador for Greenport West-Holland and member of the Economic Board Zuid-Holland, Van Gogh developed the concept Feeding and Greening Megacities. The aim of this concept is to offer new opportunities for Dutch horticulture by developing knowledge and innovation in the field of feeding the population of international megacities.

Van Gogh also handed over to Premier Li Keqiang the book ‘Plant Empowerment’ and a pair of smart AR glasses. With the glasses Chinese growers can be helped remotely by Dutch consultants. In ‘Plant Empowerment’ the modern insights in the Dutch growing concept ‘Next Generation Growing’ about the cultivation in greenhouses are brought together. Van Gogh: “The core message is: safe and produce more, with less costs and less energy consumption.” 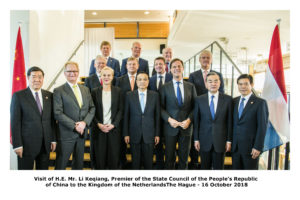 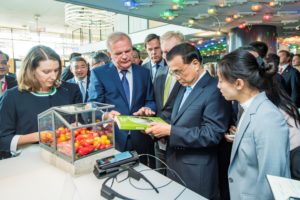 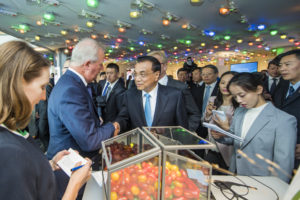