Growing a tomato crop that produces high yields of good quality tomatoes, while using a minimum amount of resources, and without ever entering the greenhouse. This may sound impossible to do, but team AuTomatoes proved it is indeed possible. Team AuTomatoes convincingly won Wageningen University’s Autonomous Greenhous Challenge by scoring highest on all grading criteria: they achieved the highest net profit by using the least amount of resources, and the jury rated their AI strategy as the best. The team also applied the principles of Plant Empowerment in their algorithms to optimally support the plant balances and realize a balanced and empowered crop. Thus, the plant stood completely central in all actions of team AuTomatoes.
Consultant René Beerkens, and researcher and data analyst Evripidis Papadopoulos from Hoogendoorn Growth Management take us on team AuTomatoes’ journey to this spectacular win.

Almost eliminated by quality
Team AuTomatoes was formed by employees and students of Van der Hoeven Horticultural Projects, TU Delft, KeyGene, and Hoogendoorn. This combination of people from different backgrounds was chosen to combine knowledge and experience with data in order to discover places no one had gone before.
After the team was formed the actual Challenge was preceded by a hackathon, in which 21 teams competed to maximize the net profit of a virtual tomato crop in a virtual greenhouse. René: “The hackathon challenged us to think like a model, you have to start thinking in algorithms and optimal values.” When the team received the first results, they were excited to see they were doing well. However, the team had focused on increasing production and decreasing costs, but the Brix-value, that determines the quality, was not that good. “The game changer of the hackathon was the Brix-value, which could cause huge price differences. When we found out about this we started to focus more on the quality as well. This helped us to increase the quality, due to which we ended up in 5th place and just made it into the Autonomous Greenhouse Challenge”, René says. Despite the stressful 24 hours, team AuTomatoes did profit from the hackathon. René: “The hackathon was a real bonding experience. You spend 24 hours with people you barely know. You are going into the extreme, and that is when you learn how people act and think. We started the hackathon as individuals and we came out as a real team.”

Confidence washed down
Before the start of the Autonomous Greenhouse Challenge, René and Evripidis together set up the AI strategy with which the team started the Challenge. Evripidis: “We came up with our initial strategy based on our combined experience with and knowledge of data analysis and Data-Driven Growing. When we pitched the idea to the other team members, they all asked us why we came up with this strategy. All team members come from different disciplines, so if anyone said something, everyone else would ask: “Why?”, because we did not want to build on assumptions. After a nice discussion in which we answered all the “Whys” and explained our reasons we all agreed on the AI strategy.”
The team started the Challenge a little insecure, because everything was new and they did not know what to expect. However, this changed after the first results came in. Evripidis: “In the first few weeks we were always checking everything, but after the first two weeks we started to feel more confident and checked things less and less. And then when we were all super confident and were almost not checking anything anymore we had a flooding in the greenhouse.” A water pipe close to the Challenge’s greenhouse compartments had burst, causing floods in all compartments. Evripidis: “The algorithms kept working with the initial data due to our fallback scenarios, but we had to replace all our additional sensors. Fortunately everyone involved responded very fast, so in the end the damage wasn’t that bad.” René: ”Afterwards we put some extra energy in disease prevention and fortunately did not experience any negative effects on the crop. In the end, the flooding of our greenhouse was actually the thing that brought our focus back.” Both René and Evripidis agree on the importance of team work, in general, and more specific in stressful situations. Evripidis: “The aftermath of the flooding was intense, but all team members gave their all to get back on track. We needed less than two hours to change the sensors and come back to normal standards. This team work made us perform at our best and provided the energy to keep going.”

Results
The retrieval of focus worked out very well in the end. Team AuTomatoes won the Autonomous Greenhouse Challenge with flying colors. They scored highest on all scoring criteria and managed to grow the most kilograms of tomatoes of the best quality, while using the least amount of resources. René: “Hearing that we won the Challenge gave us such a glorious feeling. We did it!” Evripidis: “From the very beginning we believed in our knowledge and experience, but you always have doubts. Therefore, the results of the Challenge confirmed a lot for us personally as well.”
So how did they manage to accomplish this? According to René, the team won by doing more with less. “We just used every resource Mother Nature gives us and used it as efficiently as possible. For example, if we get radiation, we also get heat, and you should not let that heat escape. When plants start to evaporate due to radiation, do not let the humidity escape. And above all, if you have CO2 in your greenhouse, try to trap it inside by keeping the vents as closed as possible.” 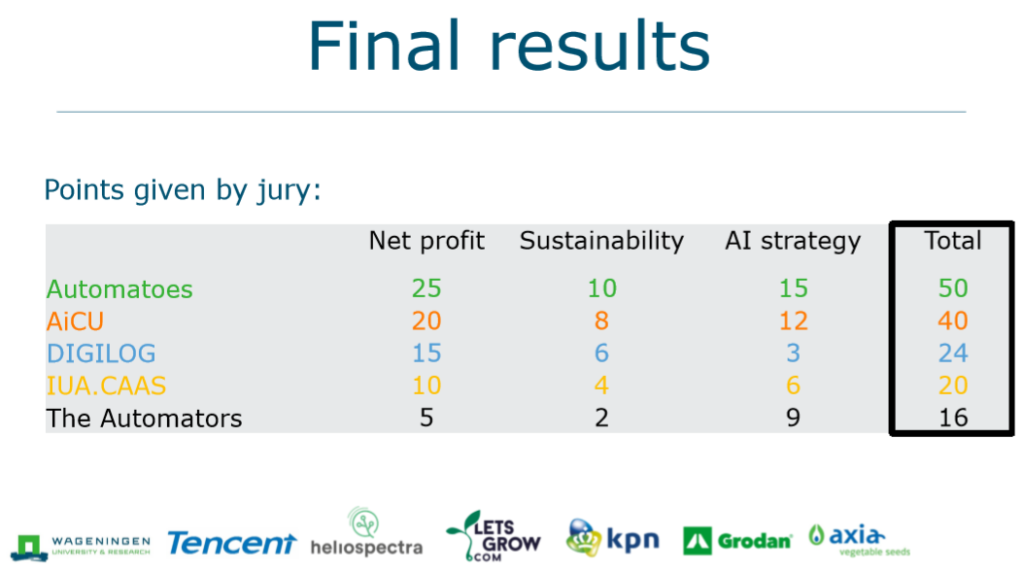 Solutions for growers
“Our goal is to make the lives of growers easier with our tools and solutions”, says Evripidis. During the Challenge they used tools and developed solutions that indeed contribute to this goal. For example, the team made use of a central dashboard to display all their data. This way, all relevant information was always available to all team members. Moreover, this data has been used for the development of the algorithms that controlled the growth climate. Evripidis: “By using this dashboard growers can see at a glance if everything is in line, or if something is wrong.”
The team also made use of an innovative new sensor: the light penetration ladder. Evripidis: “This sensor measures light at three different levels and helped us to see the actual light penetration in the canopy. With this measurement you can see what amount of light is intercepted by the canopy, based on which we made decisions about our leaf pruning strategy.”
Another tool is the ventilation optimization control that the team developed. For this control the grower only has to enter three set points and the algorithm will take care of the rest. The same goes for the irrigation control. Evripidis: “With our algorithms the grower only has to give in the desired dry back of the substrate and the algorithm will find the proper time to stop irrigation.”
René: “We are currently working hard to make these solutions available for growers. We want to provide growers with better control of their greenhouse climate with simplified controls. We do this by connecting controls to each other. This will give them peace of mind.”

Manage Cookie Consent
To provide the best experiences, we use technologies like cookies to store and/or access device information. Consenting to these technologies will allow us to process data such as browsing behavior or unique IDs on this site. Not consenting or withdrawing consent, may adversely affect certain features and functions.
Manage options Manage services Manage vendors Read more about these purposes
View preferences
{title} {title} {title}

Manage Cookie Consent
To provide the best experiences, we use technologies like cookies to store and/or access device information. Consenting to these technologies will allow us to process data such as browsing behavior or unique IDs on this site. Not consenting or withdrawing consent, may adversely affect certain features and functions.
Manage options Manage services Manage vendors Read more about these purposes
View preferences
{title} {title} {title}